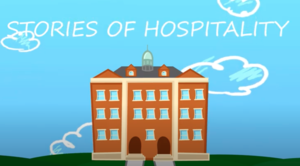 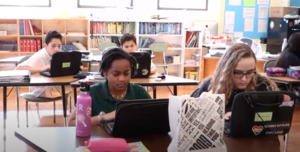 Loyola Middle School students in grades 7 and 8 participated in a unique project with Boston College called The Guestbook Project, which gives youth a chance to tell their story and break down the barriers of social injustice.

From October 2019 to March 2020, Loyola Academy Grade 7 and 8 students participated in The Guestbook Project, led by Dr. Richard Kearney, The Charles Seelig Professor in Philosophy at Boston College. The Guestbook Project aims to give young people the opportunity to create peace by exchanging stories and turning them into creative digital projects that can inspire change all over the world.

“Change happens when pain is turned into poetry in the crossing of narratives,” says Project Director, Richard Kearney.

In partnering with Saint Columbkille, the Loyola Academy team of Mr. Anthony DeVito and Mr. David Walsh aspired to bring the vision of the project to their classrooms and to ultimately promote the power of digital storytelling as a means of healing divisions in a unique collaboration called Stories of Hospitality.

Mr. DeVito, Loyola science teacher, and Mr. Walsh, Loyola social studies teacher, co-taught religion for grades 7 and 8 in the 2019-2020 school year. They utilized that time to pursue various social justice assignments as part of the Guestbook Project over a period of about five months, in which about 40 students participated.

“The goal was to put yourself in someone else’s shoes to see how they experience the world,” says Mr. DeVito. “[Each student] chose a moment of conflict in their life and described it in great detail, so that someone who is different than them could understand what they went through.”

Overall, the students took time to reflect on their self-identity, as well as their interpersonal relationships. The Loyola teachers felt it was a remarkable self-reflective process that allowed the students to grow emotionally and physically. The goal of the assignments reflected the school’s core values, as well as the Loyola values of Magis and “Men and women for and with others.”

“Everyone has a story,” says Mr. Walsh. “It seems to have sunk in… and is a particular success for this project. It definitely leads to a lot of growth in the students.

As the middle school students worked through the project, they realized that it would be more than just an assignment, but also a truly transformative and eye-opening experience. The students enjoyed learning about other people’s stories and looked forward to watching each other’s videos.

“As a teacher, you see so much transformation throughout the year and that was put into fast forward with this project,” says Mr. DeVito. “To see how they treat others, and respond to various differences. [This project] expedited that process and [it was] great to see the kids grow so much in a short time.”

To finish the assignment, each student was asked to create a video to tell their story. The Guestbook Project compiled the following video to showcase the success of the project.

“Without Dr. Kearney and BC’s guidance on this project, the students would not have been able to have this kind of unique experience,” says Mr. DeVito. “BC is an amazing university and it’s amazing to have the opportunity to work with them and be acknowledged for our work and the effort of our students.”

The teachers noted that the students take pride in the fact that Saint Columbkille partners with BC and were appreciative of the fact that they had a special opportunity to do this project. Overall, it not only allowed them to take a closer look at their peers, but also at themselves.