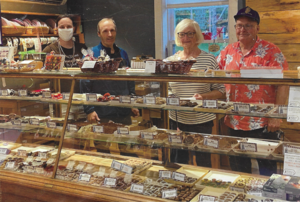 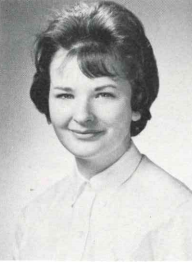 1962 Saint Cols alumna opened Wilbur's of Maine Chocolate Confections with her husband in 1983.

Class of 1962 alumna, Catherine Carty-Wilbur, grew up on Foster Street and attended Saint Columbkille for Grades 1-2 and Grades 7-12. She fondly describes her time in Brighton and at Saint Columbkille. She loved going to school at Saint Cols with her friends and says “what a wonderful time we all had” walking to school, collecting friends along the way. She and her classmates and neighbors walked home for lunch each day in first and second grade.

Carty-Wilbur graduated from the Lynch School of Education and Human Development at Boston College in 1966 and immediately went into teaching. She participated in a year-long program, called Lay Apostulate, that sent her to live in an Eskimo mission in Alaska with three other BC classmates and two BC nursing students. She taught all over the world for many years, in Roxbury, Japan and Maine, to name a few.

In August 1970, Carty-Wilbur married her husband Tom Wilbur, whom she met while teaching in Okinawa, Japan when he was on his way back from Vietnam. They have three children and settled in Freeport, Maine.

After her third child was born in 1982, Tom bought her a box of chocolates to celebrate. Catherine said to her husband, “how can I have a piece of chocolate every day for the rest of my life?” And the idea to open a chocolate shop was born.

Both working other jobs and with three small children, Tom and Catherine opened Wilbur’s of Maine Chocolate Confections in 1983. It took Tom the better part of a year to perfect the chocolate recipe and their caramel is always homemade to perfection. Carty-Wilbur shares that her favorite item at the store is the turtle. “We’re pretty proud of our caramel,” she says.

Now retired, Tom and Catherine remain part of the family business. These days, their son Andy Wilbur and his wife Kristin Frazier run Wilbur’s of Maine. During the pandemic, Carty-Wilbur has continued teaching, this time with her grandchildren, as they participated in remote learning for many months.

A fun event space at the store was opened a few years ago and has been closed since the start of the pandemic. Tours of the store and their confection-making process have also been on hold. Carty-Wilbur looks forward to getting back to normal and opening everything back up again. With the 40th anniversary of the store coming up in 2023, Carty-Wilbur says they are hoping to be able to celebrate big!

Catherine Carty-Wilbur was recently included in a Boston College Magazine article for her tasty confections. The store has won numerous awards, including the Maine’s Reader’s Choice Award (every year since the award began in 2010) and the Maine Governor’s Award. Learn more about Wilbur’s of Maine Chocolate Confections here.