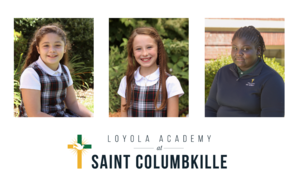 Saint Columbkille's Loyola Academy has announced the September “Loyola Leaders of the Month.”

“Isabella has embodied the core value of men and women for others,” says Ms. Foley, Loyola Academy teacher. “She has participated fully in every class, cares deeply for the people around her and she has volunteered for extra responsibilities, as well as acting on her own initiative. We are proud to recognize her as our 6th Grade Loyola Leader!”

“Rose is a wonderful example of Loyola’s core value of men and women for others,” says Ms. Phelps, Loyola Academy teacher. “After Loyola decided to do lunch inside each day, Rose realized that this is not what her classmates preferred and put together a petition to return outside for lunch (which we now do). Rose is often seen helping peers, running errands for teachers, and advocating for what she believes is right.”

“Ester has a willingness to go above and beyond as a student, classmate, community member, and friend,” says Ms. O’Brien, Loyola Academy teacher. “She has taken on extra responsibilities in the classroom without being asked, and participates in class discussions thoughtfully. Ester has demonstrated the Jesuit value of Magis, and we are proud to recognize her as a Loyola Leader this month!”