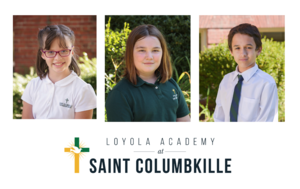 Saint Columbkille's Loyola Academy has named the Loyola Leader of the Month for October.

“Kalea consistently demonstrates Cura Personalis and Magis,” says Loyola teacher Ms. Harmon. “Since the very start of the school year, Kalea has been a great model of how to properly take care of herself and others. She is well organized, balances her responsibilities well, and takes ownership of her learning. She also completes tasks around the classroom without being asked and shows leadership and selflessness towards adults and peers outside of the classroom. It is such an honor to have Kalea as part of our Loyola Academy community!”

“Rosemary demonstrates two of our Ignatian values: Magis and Men and Women for Others,” says Loyola teacher Mr. DeVito. “Throughout the month she has pushed herself to achieve at a high level in the classroom, taking great pride in her perseverance and success. Rosemary has also placed the needs of her peers before her own on multiple occasions, strengthening our Loyola community.”

“Alex is being recognized as our Loyola Leader for the month of October for his effort, commitment to learning, and contributions to our school community,” says Ms. O’Brien, Loyola Academy teacher. “He is very curious and brings his passions for science and technology to the classroom, benefitting all of his classmates. He is always kind and respectful and demonstrates cura personalis, or care for the whole person, in his interactions with everyone at school.”