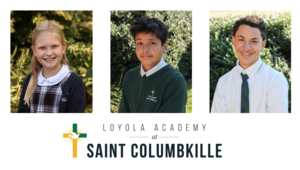 January's Loyola Leaders of the Month announced for Grades 6, 7 and 8.

“Ginny was awarded the Loyola Leader of the Month in recognition of her hard work, kindness and warmth,” says Ms. Foley, Loyola Academy teacher. “She never fails to brighten a room! In the classroom, she never hesitates to help another, and works as hard for others as she does for herself. She listens carefully, asks thoughtful questions and produces wonderful work. She is responsible and insightful, and she is an exemplar of Magis.”

“Luis is receiving the Loyola Leader of the Month award for January because of his self-advocacy and curiosity in the classroom,” says Ms. Phelps, Loyola Academy teacher. “He is asking the right questions to fully understand the class material and is performing well academically as a result. He exemplifies the Jesuit value of Magis; always striving to be more and to do more. Keep working hard, Luis!”

“Le’Roy earned the Loyola Leader of the Month award for January for the Ignatian value of Magis,” says Loyola teacher Mr. Walsh. “I particularly see this during after-school sports clubs when Le’Roy is always looking to get more classmates involved and play more games. In the classroom, he has been developing habits of the best learners. For example, continuing with Magis, whenever Le’Roy has finished work early, he continues to be productive by having an outside reading book or preparing with a few classmates for an upcoming assessment. Le’Roy has truly shown to be a great classmate and leader in our school!”