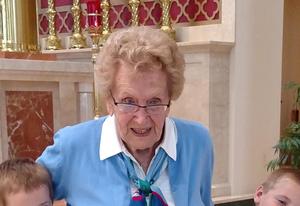 Mary Rogan Halin graduated from Saint Columbkille in 1936 and was a member of the first co-ed graduating class. She vividly remembers how wonderful it was to grow up in Brighton and recalls the school feeling brand new. Born in 1918, Mary started at Saint Cols in first grade (there was no kindergarten at the time) in 1924.

Mary grew up on Murdock Street with her brother, Francis (Frank) Rogan (who attended Saint Cols through 6th grade before attending Boston Latin) and sister, Barbara Rogan Harvey (Class of 1952). Their mom was from Ireland and their father was born in England, like many of the immigrant families living in Brighton at the time. No one had a car back then, so everyone walked. They would go to Brighton Center to the drugstore or walk to Allston for a treat. In the winter, the town would close down Dustin Street to go sledding (they called it “coasting”) on flyers, which are sleds made of wood with metal runners.

The family was fortunate that Mary’s father never lost his job throughout the Depression. He was a cashier for the MTA (now the MBTA) and took a step down to go back on as a conductor to take tickets on the street car in the 1930s. Her mom was very good at home economics and made sure they always had plenty of food. She made their clothes and saved so they could give back and help others.

Mary was diagnosed with rheumatic fever as a child and missed much of first and second grade. Her mother taught her at home to ensure she wouldn’t fall behind. The sisters made a real impact on her time at Saint Columbkille. Her favorite nun, Sister Catherine Clare, taught third grade and was so kind and welcoming to Mary when she came back to school.

Additionally, she fondly recalls Sister Nativitas, who taught 8th grade. “She was really loads of fun,” says Mary. “She played baseball with the boys at noon time. When she would get up to bat, she would tuck her skirts under waist so she could bat and run.”

Saint Cols had two curriculum tracks in the 20s and 30s – one for students bound for college as well as a vocational track. Mary was in the college track, though she decided to go to nursing school at Mount Auburn (which didn’t count as college back then). Mary participated in the Debate Team in high school as well. The yearbook photo below of the ladies on the Saint Cols steps includes Mary in the top middle of the Debate Club.

Mary’s daughter Patrice says that “her education [at Saint Cols] has paid it forward to the rest of her kids. It was such a good classical education. Mom would always teach us some of the things she learned for English and Math.” Mary recalls that “some of the teachers were absolutely excellent.”

Shortly after she graduated from nursing school, World War II began and Mary joined the First Army Nursing Corps with a friend. She spent more than two years in Europe with the Medical Hospital Corps from Harvard. She entered France at Omaha Beach in Normandy just one month after the famous invasion of Allied troops and assisted with patients during the Battle of the Bulge.

Mary met her husband, an officer in the military, during the war and they got married in 1946 (wedding photo below of them in uniform). They were a military family, moving around a lot, while her husband was deployed to Vietnam, Korea and other locations. Mary and her husband had four kids, two boys and two girls. They were married for 44 years until he passed away in 1990.

Mary says that her Catholic faith helped her throughout her life. “It’s the one thing you could count on,” she recalls. She and her classmates went to Mass every day, which provided a good religious foundation. When she was in the military, she also attended Mass frequently, which continued the good habit and helped her get through the war. She says her faith helped her during her husband’s deployments as well; she relied on her faith a lot at that time. Photos of Mary with her great grandsons are included below.

“She is a very strong woman,” says her daughter Patrice. Overall, Mary says that she “wouldn’t trade [this life] for anything. I was sick when I was young and had a good life after that. Brighton was a good place to grow up.”

Mary is currently 103 years old and will turn 104 on September 1. Thank you, Mary, for sharing your incredible story with us!