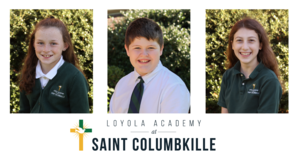 The March Loyola Leaders of the Month are Nora Sullivan, Conor Dowling and Lila Cownie.

“Nora Sullivan has earned the title of Loyola Leader this month for her hard work, care for others and growing confidence,” says Loyola teacher Ms. Foley. “She shares deep reflections with the class, and is a leader in independent and group work. We have seen her grow into herself this year. She is an exemplar of Magis - always striving to do and be more! All of 6th grade is so proud of her!”

“Conor has demonstrated leadership in Loyola Academy through his selflessness and thirst for learning,” says Loyola teacher Mr. DeVito. “Conor is a conscientious student, often asking thought-provoking questions leading to rich classroom discussions. His innate curiosity exemplifies our core value of Magis. Conor also reminds us of what it means to be Men and Women for Others by consistently checking in on his classmates’ well-being, and offering a kind word of encouragement.”

“Lila has proven time and time again that she is a leader in the classroom,” says Loyola teacher Mr. Walsh. “The most recent example of this was her serving as the director of our commercial to raise awareness for our supply drive. Using Lila’s direction, 8B was able to come together and spread the message of love and care to help a community in need!”