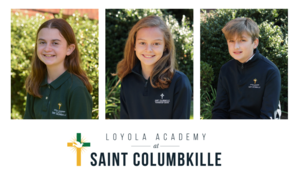 The April Loyola Leaders of the Month are Evie Caffrey-O’Reilly, Jeanne Ferte and Andrew Cyr.

“Evie has been chosen for the April Loyola Leader award due to her hard work, dedication to studies, and fantastic leadership qualities,” says Loyola teacher Ms. Harmon. “We are so enamored by her selflessness and empathy for others and she truly exhibits the Loyola Value of Cura Personalis this way. She brings positivity, strength, and God’s light into every room she enters, inside and outside of school. We are so lucky to have Evie as a part of our Loyola community!”

“As a new student this year at Saint Cols, Jeanne has already become a committed leader in the 7th grade class,” says Loyola teacher Ms. Phelps. “Her dedication to learning, care, and consistent eagerness to help others are admirable qualities that make her a positive role model for her peers. Her enthusiasm brightens every space she is in. Jeanne is a strong example of Magis, always striving to do more and be more! We are so grateful for you, Jeanne!”

“Andrew has shown an extraordinary commitment to growth and learning this year, and as graduation approaches, he has shown that he is ready for high school,” says Loyola teacher Ms. Fonte. “Andrew demonstrates the Jesuit value of Magis, because he consistently goes above and beyond. Congratulations, Andrew!”