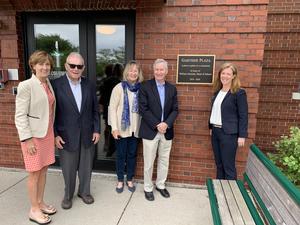 Dr. William Gartside, previous Head of School, was honored at a ceremony to dedicate Gartside Plaza on Friday, May 20, 2022.
Dr. William Gartside was the Head of School for Saint Columbkille for 10 years, from 2010 to 2020. He retired at the end of the 2019-2020 school year at the height of the pandemic. To honor his leadership at the school and his commitment to Saint Cols, the school held an event on Friday, May 20 celebrating his career in Catholic education. The school dedicated the plaza, for which he helped fundraise, design and build during his tenure, to him with a plaque.
The morning event began with a clap-out, a time-honored tradition at Saint Cols where a special person walks the halls of the school while each classroom claps and cheers. The entire school participated in the event, including a "tunnel" of middle school students leading out to the plaza.
Remarks were given by Kate Ward, Chief Advancement & Enrollment Officer; Fr. Fitzgerald, pastor at St. Columbkille Parish; Kristin McAuliffe, STCPS parent; Jean O'Connor, longtime STCPS teacher and STCPS alumna; Jabez Lubega, Grade 8 student; and Jen Kowieski, current Head of School. Guests were treated to a performance of two songs from the upcoming school play Mary Poppins.
Dr. Gartside then spoke to the audience, thanking them for his time at Saint Columbkille. Also in attendance and in the third photo below are Peggy Strakosch, current Chair of the Board of Trustees; Peter McLaughlin, former Chair of the Board of Trustees; and Patricia Casey, former Chair of the Board of Trustees, in addition to Dr. Gartside and Jen Kowieski.