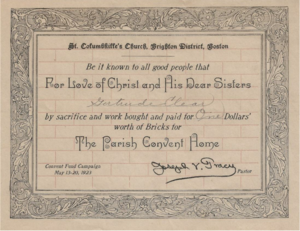 The archives at the Sisters of Saint Joseph recently shared the 1923 donation certificate for the fund to build the Saint Columbkille Convent.

Katie McNally, archivist for the Sisters of Saint Joseph of Boston, shared an article she wrote this summer about an “artifact of the month.” The August article celebrates a 1923 certificate for a $1 donation to build the St. Columbkille Convent.

McNally writes: the [below] Certificate of Donation was received by 7-year-old student Gertrude Clear, who donated one dollar to the Convent Fund Campaign of 1923, which raised money to build the convent at St. Columbkille Church in Brighton, MA. Gertrude Clear later became Sr. Padraic, CSJ. She handed down her story to the Archives, explaining that the $1 donation was part of a larger sacrifice made by her father to help build a convent at St. Columbkille:

“My father was earning $21 per week at the time and gave us each one dollar to ‘buy a brick.’ There were six of us children, which meant that the total donation of his own $15 plus donations for each of us took an entire week’s pay.”

Thank you, Ms. McNally for such a fascinating piece of Brighton and Saint Columbkille history. Late in life, Gertrude taught English as a Second Language at Saint Columbkille from 1987-1988, and lived in the very convent she helped build. Gertrude passed away in 2006. Her obituary can be found here.