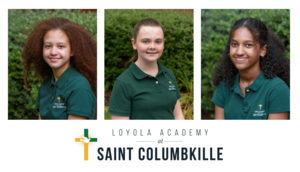 “Ngozi goes above and beyond as a leader in 6th grade,” says Loyola teacher Ms. Phelps. “She is always looking for ways to help out her peers, her teachers, and her school community. Ngozi especially loves helping out her peers by returning missing items back to students from 6A’s lost and found. She also shows wonderful self-awareness and self-reflection. Ngozi is a wonderful example of our Loyola value of People for Others.”

“Maeve has been chosen as a Loyola leader for December for her demonstration of our core value of Magis,” says Loyola teacher Mr. DeVito. “Maeve consistently pushes herself to reach her goals both in and out of the classroom. Her effort on daily assignments in all academic classes, as well as her leadership in the production of Aladdin has earned her the title of Loyola Leader.”

“Pishon was chosen to be the Loyola Leader because she’s a natural leader within 8th grade,” says Loyola teacher Mr. Walsh. “She portrayed Mary during 8th grade’s Nativity and set a great example of how 8th grade can act as leaders within our school community. As we return from break, Pishon has already set her eyes on further ways to help out the community, fulfilling the Loyola value of Magis. We all can’t wait to see Pishon’s impact in the new year.”